No Result
View All Result
Home OTHER

At times we have talked about the potential danger of coastal regions in relation to rising sea levels as a result of climate change , but being in a corner (or directly separated) from the continental mass has meant being exposed to certain climatic threats for a long time. . The Netherlands is one of these regions and he learned it the hard way, which is why they decided to create a great eight kilometer long dike .

It is about Oosterscheldekering, a word in Dutch that translated would be something like “barrier against storms of the Eastern Scheldt”. This mega-construction was part of a great plan to prevent future disasters such as what happened in the terrible flood of 1953 , caused by the destruction of the levees and which claimed more than 1,800 victims. And to great ills, great remedies, literally.

That great plan that we refer to in the introduction is the Delta Plan ( Deltawerken ). A strategy that was actually thought before this catastrophe, when in 1937 the Ministry of Water and Public Works ( Rijkwaterstaat ) carried out studies by which they detected the danger of the nation in times of rising sea levels and currents more powerful.

The Delta Plan began with the idea of ​​long-term damming of the mouths of some Dutch rivers, such as the Brielse Gat and the Botlek, but what happened in ’53 led to a rethinking of the execution, becoming radical. In twenty days the Delta Commission was formed and a larger plan was established , the most outstanding work of which would end up being Oosterscheldekering. 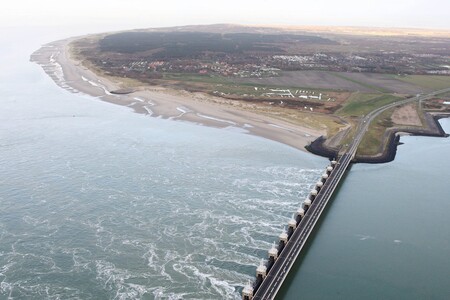 Oosterscheldekering’s original idea was to build a completely closed dike, but this caused much controversy over the foreseeable desalination of standing water and its environmental impact. For this reason, it was decided to build it so that it was only closed in risky situations.

The works began in 1976 and it took just over a decade to develop . It was completed in 1986, although the road over the levee wasn’t ready until a year later.https://www.youtube.com/embed/d7j8qW4fwHE?enablejsapi=1&origin=https://www.xataka.com

The Oosterscheldekering structure is based on 65 concrete piers and a total of 62 steel gates , each 42 meters wide and 6 to 12 meters high. The pillars are between 35 and 38.75 meters high and weigh about 18,000 tons. According to the Watersnood Museum website , each of these pillars required 7,000 cubic meters of concrete and cost around a year and a half. 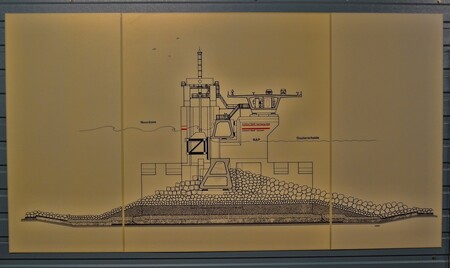 Furthermore, the scale of the Delta Project was such that three artificial islands had to be built , two of them serving as the Oosterscheldekering base. They were used to build the parts of the dike, enabling a dry basin of 1 square kilometer (more than 15 meters below sea level) that was later flooded and using special boats to assemble the elements and finish the pillars, such as the Cardium ( the most expensive ship in the Delta fleet, whose name means “cockle”). 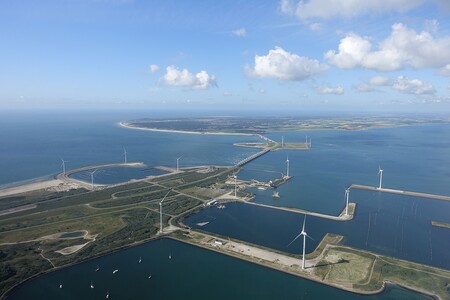 Specifically, they are the islands of Noordland and Neeltje-Jans . The latter (at the center of the estuary) was also used as a base for the visitor and maintenance center.

Thus, Oosterscheldekering unites the Zeeland islands of Schouwen-Duiveland and Noord-Bevelan, in such a way that it acts as a protective barrier within the province of Zeeland. As we have said, in total there are 8 kilometers of dike, but only the area of ​​mobile barriers already measures almost 3 kilometers (which is not little).

It will be a real wonder if it works

On their official website they explain that the construction of the entire barrier cost 2,500 million euros and that in theory with it the probability of flooding will be reduced to once every 4,000 years .

The barrier closes if the water remains at a level above 3 meters NAP (“Amsterdam Normal Level”). Its estimated duration is 200 years and it is said that it was considered the eighth Wonder of the World by the American Association of Civil Engineers. If this is the case, you have reasons for the enormous size of the project, although above all the hope is that there will not be floods as disastrous as years ago.

For Honor for Xbox One Review: Single-minded Battle Simulation

Which games would you like to play on the SNES Mini?

Destiny Will Be Down For Maintenance Next Week, Here’s When

Destiny Will Be Down For Maintenance Next Week, Here’s When

No Result
View All Result